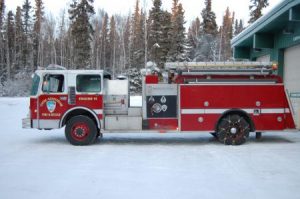 Originally designated Engine 41 this fire truck served the Rosie Creek area during its that last years at CGFR. It was the only open cab engine in the fleet. Engine 41 is a 1987 Western States Triple Combination Engine that was assembled on a Spartan Chassis. It is powered with a Detroit Diesel engine, an Allison 4 speed transmission and had the ability to be locked in 6 wheel drive. It was retired in 2020 and returned to the Fairbanks-North-star Borough.